Home > Lifestyle > A Portentous Anniversary for The Hive

The Hive Celebrated its 13th Anniversary

We were pleased and humbled recently to attend the 13th anniversary party for The Hive Gallery & Art Studios in downtown LA. Founded in 2005, the Hive exists at the forefront of the artistic mecca that downtown Los Angeles has become. As friends of the gallery and great admirers of the many terrific artists who make it the semi-permanent home for their work, we wouldn’t have missed this 13th anniversary party for the world.

We soaked in the buzz, met up with old friends and new, and even enjoyed some delicious honey treats. It was a perfect night from start to finish: the cool, still air kissed our faces each time we stepped outside to greet newly arriving friends.

The exhibits and celebration weren’t limited to the interior by any stretch of the imagination. Just outside of the main entrance we stood a while to watch some beautiful painting unfold right before our eyes.

We met the evening’s spirit animal, the most dapper GentleBee you could hope to see.

We were gifted honey bee treats which we tried to share with a painting of a boxer that had had a particularly rough time in the ring. Sadly, our best efforts were for naught.

The watchful eyes of Mother Bee kept all party goers safe from harm and free to enjoy the festivities.

We met Cig Neutron and shared cake and tales of artistry. He is not only an old friend of The Hive, but had a piece all his own on display.

Finally, we caught up with the founder of the gallery himself, Nathan Cartwright. He was incredibly busy floating about between people asking questions or buying pieces, but we managed to capture his attention to catch up. 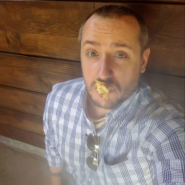 Dreams In The Mushroom House

We Don’t Need Saving: Love is All Around Us